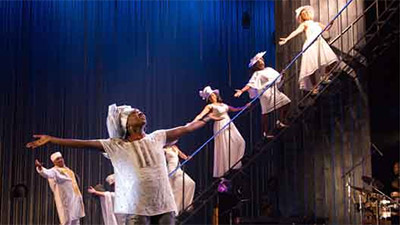 McCarter is proud to call Princeton and the University campus home. As a creator of world-class theater and a presenter of some of the finest performing artists, we strive to engage, educate, and entertain our community.  McCarter is committed to:

An independent, non-profit regional theater, McCarter exists in the heart of the new Princeton University Arts District, adjacent to the Lewis Center for the Arts, the Dinky Bar, Cargot, and Maya Lin’s new outdoor installation. McCarter operates the 1,100 seat Matthews Theatre and the 360 seat Berlind Theatre under a rent-free lease, with donated services/utilities and generous financial support from Princeton University.

McCarter is led by Artistic Director, Emily Mann, who is launching her 30th season and Managing Director, Mike Rosenberg, who joined McCarter in May, 2018. Under Emily’s leadership, McCarter has become a theater celebrated for incubating, producing, and presenting plays by women and people of color. The values which guide the play selection process include diversity, new plays by emerging and established artists, and re-examining the classic repertoire through a contemporary lens. Each season, McCarter produces a 5-play Theater Series and a beloved production of A Christmas Carol. 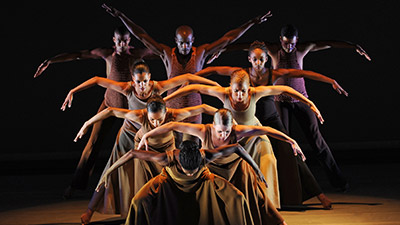 McCarter also offers a Presented Series of more than 50 “one-night only” events that feature an eclectic mix of music, dance, and spoken word from around the world. William Lockwood ’59 has been curating this series since 1963. Bill has a remarkable eye for finding artists in the early stages of their careers. He has introduced Princeton audiences to Wynton Marsalis, pianist Lang Lang, Twyla Tharp, and singer/songwriter Rhiannon Giddens.

McCarter and Princeton share the theatre center during the academic year. Both the Lewis Center and the Triangle Club have dedicated rehearsal rooms and office spaces and also perform on the Matthews and Berlind stages. In the Berlind, the University’s programs for Theater, Dance, and Music Theatre have the stage for 15 weeks each season to present student work, the Annual Dance Festival, and other programs. In the Matthews, Triangle produces their musical twice a year (including Reunion Weekend). McCarter  professional technical crews assist on both stages to help bring the University’s work to life. Additionally, non-profit groups like the Princeton Festival and American Repertory Ballet rent the Matthews Theatre for their annual performances.

McCarter’s educational programs include after school, in-school, student matinee, creative aging, summer camps, internships, and audience engagement opportunities. These programs take place in Princeton, Trenton, and throughout central New Jersey and are often done in collaboration with other non-profit and government agencies. With a dual emphasis on artistry and social-emotional skills, McCarter is deeply invested in the ways that theater education encourages personal growth. 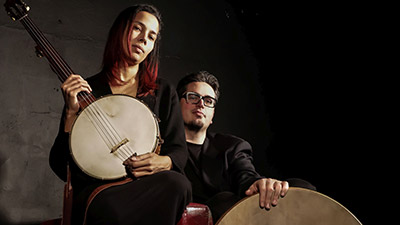 McCarter does all of this with an annual operating budget of $13.5 million derived primarily from ticket sales, and philanthropic contributions.

Princeton University and McCarter share a unique relationship, especially in the context of our peers. We are completely separate institutions, each with its own staff, board, and fundraising efforts. American Repertory Theatre is a program of Harvard University, although their Master of Liberal Arts degree program (through Harvard’s Extension School) recently suspended operations. Some Yale Repertory Theatre staff also have appointments to the Yale School of Drama where they train students as part of Yale’s MFA program. La Jolla Playhouse no longer shares staff with University of California, San Diego but does provide professional residencies for all 2nd year MFA theatre students.  These peer theaters share facilities and stages (to varying degrees) with their host university and produce 6 or more plays a year, and the occasional presented event.

Princeton University’s unique connection with McCarter has helped reinforce our work and fuel our success for the last 45 years.  At this moment, as we focus on the future, we intend to broaden this work, devoting more energy and resources to deepening McCarter’s relationship with the University, and maximizing the partnership’s potential.

The McCarter Theatre opened on February 21, 1930 after being designed, financed, and built by Princeton University’s famed Triangle Club. In 1972, the University transferred the direct operation of the theatre to the newly created McCarter Theater Company, a fully independent, tax-exempt organization. McCarter and the University worked together to raise the funds to build the Roger S. Berlind Theatre which opened in 2003.

Beginning with Emily Mann’s arrival as Artistic Director in 1990, McCarter has collaborated with the University and the Lewis Center in a number of ways. Recent highlights include:

Roger S. Berlind Playwright-In-Residence Program
McCarter has partnered with the Lewis Center on new play commissions and special projects through this program which brings esteemed playwrights to campus and supports the development of significant new work. Playwrights under this umbrella include Christopher Durang, Naomi Iizuka, Sarah Ruhl, and Branden Jacobs-Jenkins ’06. The Lewis Center’s emphasis on race and diversity throughout its work aligns with McCarter’s focus on the stories of women and people of color.

Princeton University Preparatory Program
Each season, PUPP Director Jason Klugman brings students to McCarter performances as part of the program’s academic and cultural enrichment efforts. In the last five years, 430 students have seen plays such as Proof, Disgraced, Crowns, and The Piano Lesson. PUPP students and a McCarter’s staff member engage in a discussion after each performance.

The Song of Rome
Princeton University Humanities Council funded the development of a McCarter-commissioned play, The Song of Rome. Playwrights Lisa Peterson and Denis O’Hare participated in a Classics symposium on Virgil and were in residence on campus. Peterson and O’Hare accompanied a Latin 333 Class to Italy and used a Princeton University student-assistant during the 2017 McCarter Artist Retreat.

The Ground on Which We Stand
McCarter and the Lewis Center jointly hosted a symposium to examine the progress made on race relations in the American theater on the 20th anniversary of August Wilson’s foundational speech, given from McCarter’s stage in 1996. Two panel discussions followed, moderated by Dean Jill Dolan and Associate Professor of Theater, Brian Herrera. Panelists included Emily Mann, Jade King Carroll, and Brandan Jacobs-Jenkins ’06.

The Every 28 Hours Plays
In collaboration with the Lewis Center and the Department of African American Studies, McCarter presented a theater project exploring police violence and inspired by the Black Lives Matter movement. Princeton University students participated in all aspects of this performance and a panel discussion followed. Panelists included Dr. Eddie Glaude, Dr. Ruha Benjamin, Dr. Susan Fiske, and President of the Black Student Union, Asanni York ‘17.

Memory and the Work Of Art
McCarter participated in this campus-wide endeavor, partnering with James Steward at the Princeton University Art Museum, Princeton Public Library, the Princeton Symphony Orchestra, and the Arts Council of Princeton to examine the role of memory in art-making as a way to mark the 10th anniversary of September 11th.

McCarter is committed to building on this legacy by bringing a new generation of performers to the stage. Concerts, projects, and performances that are interdisciplinary, more engaging for students, and directly related to University curriculum will be showcased in and around McCarter.

The Atelier
Working with Tony Award-winning composer Jason Robert Brown, McCarter produced two professional workshops of Brown’s new musical as the anchor for this course, “Connecting with The Connector.” Students directly engaged with a team of theater artists in creating an original work and experience the collaborative process from varying viewpoints: creator, performer, producer, dramaturg, and journalist.

Alumni Affairs Office – SHE ROARS Conference
McCarter executive produced a performance of “A” Train, by Anne Torsiglieri ’85, and facilitated a masterclass at the Lewis Center for students. Conference attendees attended McCarter’s mainstage production of The Age of Innocence, adapted by Douglas McGrath ’80, with a pre-show conversation led by McGrath at Richardson Auditorium.

PIIRS, “Migration: People And Cultures Across Borders”
McCarter is participating in this multi-year campus-wide initiative spearheaded by Professor Sandra Bermann by commissioning five short plays by emerging playwrights, including Martyna Majok, a current Hodder Fellow and recent Pulitzer Prize winner. These plays will examine contemporary migration issues addressed by students and faculty and will be presented in a public reading.

McCarter Intern
Alexandra Daniels ’17 is a full-time intern in McCarter’s Education Department. Alexandra graduated with a certificate in African American Studies and Theater, and served as Vice President of the Triangle Club.

Curriculum-Related Ticket Offer
McCarter has extended an offer to faculty who wish to assign McCarter shows as a part of their curriculum. Students are invited to attend for free and participate in pre/post-show engagement opportunities. As an example, Professor Michael Cadden has added Dominique Morisseau’s Detroit’67 (on McCarter’s mainstage in October) to his syllabus and will bring his students to the production.

McCarter is poised to collaborate more broadly across the campus, and more deeply with the Lewis Center. Our goal is to foster this collaboration by listening to the needs/interests of the University and to demonstrate McCarter’s engagement by experimenting with new partnership opportunities. As these conversations continue, we plan to create authentic, on-going, mutually beneficial relationships across campus, departments, and disciplines.

Brent Colburn, Vice President for Communications and Public Affairs.
McCarter is exploring the possibility of a shared communication strategy to include the creation of digital content.

Tom Dunne, Deputy Dean of Undergraduate Students.
McCarter could sponsor co-curricular performances by (and for) students with the goal of making the theatre more interesting and accessible to undergraduates.

Wendy Heller, Chair of the Department of Music.
McCarter is exploring the possibility of using the theater as a site for thesis projects from the PhD and undergraduate composition students.

Cornelia Huellstrunk, Executive Director of the Keller Center.
The Keller Center and McCarter are investigating possible collaborations including integrating McCarter with ongoing student and faculty projects and the creation of a late night performance space at McCarter for University students.

Naomi Leonard, Director of Princeton’s Council on Science and Technology.
McCarter will open tech rehearsals before dance performances and offer access to performances to the Engineering and Arts students. We will also encourage students to use McCarter as a “canvas” for their multi-disciplinary projects.

James Steward, Director of the Princeton University Art Museum.
Numerous possibilities have been discussed and include McCarter hosting pop-up galleries during the museum’s construction; McCarter producing immersive or site-inspired performances in Museum buildings; co-commissioning new dance pieces; Museum curators selecting public art and projection artists to be shown in and around McCarter.

We are poised to create a new story with Princeton and McCarter by approaching the University with a higher level of intention and planning. We envision a future where we are working closely with you to maximize our potential—and to explore the opportunity that lives at the intersection of extraordinary scholarship and artistic excellence. Together we are singular in this pursuit. 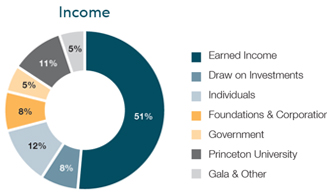 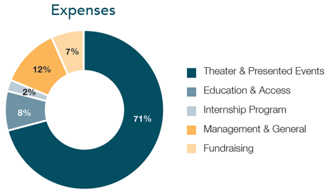 Experience Artistic Director and Resident Playwright Emily Mann’s final theater season, plus dazzling performances from some of the world’s greatest performers in music, dance, and more.