Process and Progress: Song of Rome 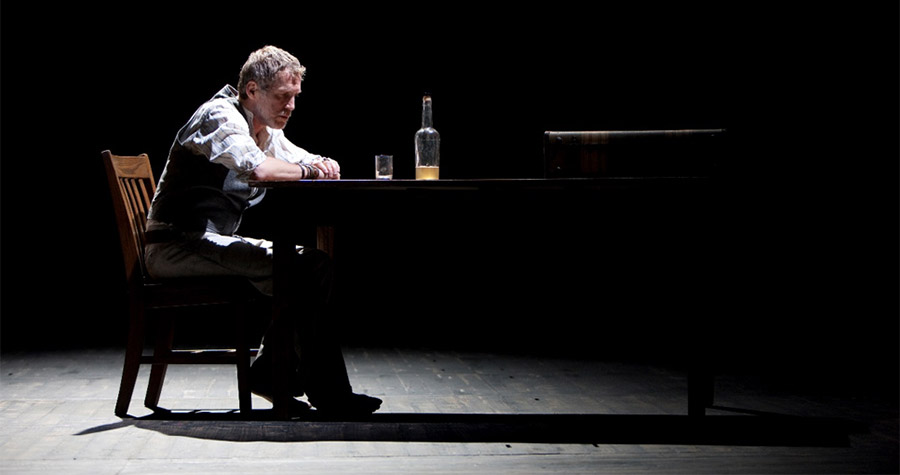 PRINCETON, NJ: Lisa Peterson and Denis O’Hare, accomplished artists individually and the collaborative team behind the critically-acclaimed one-man production of An Iliad produced at McCarter Theatre Center in 2010, are in the creation stage of a new solo piece commissioned by McCarter Theatre Center, titled Song of Rome.

Beginning with Virgil’s The Aeneid and continuing through the rise and fall of the Roman Empire, Song of Rome is inspired by Roman theatrical traditions and will feature a single female storyteller. The piece is based on Robert Fagles’ translation of The Aeneid, as well as historial works by Tacitus, Ovid, Livy, and Procopius.

Lisa and Denis’ experiences working on both An Iliad and Song of Rome benefited greatly from McCarter’s intrinsic relationship with Princeton University. During the course of research and writing, artists were given full access to the resources of Princeton University Library, engaged in tutoring and educational sessions with faculty, and enjoyed informal meetings with students who could speak ancient Greek and Latin.

During a visit by Denis and Lisa to McCarter’s Sallie B. Goodman Artist Retreat, we spoke with the pair about their creative relationship, Song of Rome, and how collaboration is invaluable to creating new works.

DENIS O’HARE
My name is Dennis O'Hare, and I'm an actor and sometimes writer.

LISA PETERSON
My name is Lisa Peterson, and I am a director and sometime writer. ::laughs::

We're currently working on a play which we're going to call The Song of Rome. It’s a companion piece to a play we wrote a few years ago called An Iliad, which had its second production on its way to New York here at McCarter. Denis and I have had a history here, and I’ve also directed a few other plays at McCarter, so it definitely feels like home for us.

When we started working on An Iliad, it took us a long time…maybe a couple of years…when we were stumbling around in the dark. I came to Denis with the story idea, asking if he simply wanted to read it out loud together. We had no idea how (or even if) we’d make a piece out of it. There were so many possibilities.

DENIS O’HARE:
We were very attracted at the idea of connecting the fall of Troy and the fall of Rome. We were playing with the idea of love as a drug as well. The connection between wanting someone, and creation. How we begin to build something bigger than ourselves, both in terms of one-on-one relationships and civilization as bigger concept.

LISA PETERSON:
With An Iliad, there’s this Homeric idea of rage as a drug, which is fascinating. What makes us fight, what makes us war-like. Those questions have led to this companion piece, where we talk about how do you build a nation, a new civilization, from the ashes of an old one.

DENIS O’HARE:
One of the best things about being here at McCarter is the relationship with the University. We have all of these immense resources. Books, historical references. We’d never be able to find all of this stuff on our own, let alone afford it, so to have the people and expertise here, not to mention or own wish-list library of these resources is amazing.

LISA PETERSON:
I feel like I do I spend a third of my life in retreats. I’m lucky in that regard because it means I’m either in the middle of a play development process, or directing.

As a director, I work with new plays quite a bit. We’ve spent time not only here at McCarter, but at Sundance and at the O’Neill and the Orchard Project, places all over the country…so I feel like we’ve had a broad range of experiences. This experience here in particular has been very…lush. And I mean that in terms of the time that’s been given to us. We feel like we’re being taken care of, but also given a lot of freedom to create.

DENIS O’HARE:
It’s actually very unusual in the industry, not to be stuck inside this structure where you are made to feel like you have to present something…to “prove” what you’ve created.

Just being around other artists and getting to know them has been great. Getting to know and hang out with Christopher Durang or Ayad Akhtar is a joy. Anything you discuss can create a kind of synergy for new ideas which can spark something inside of you.

LISA PETERSON:
We’ve been spending a lot of time in the University library and on campus. We have access to some of the professors in the Classics Department and so we've spent two different two hour sessions in the last ten days talking to them, asking questions. Eventually we’d love to have enough of a command of the languages to attempt translations on our own.

DENIS O’HARE:
Just today, we had a session with Andrew Fedlherr (Professor of Classics at Princeton University) and he gave us a ton of small ancillary pieces of information that help immensely. It’s not just “simply” teaching us Latin or Greek, they’re teaching us on-the-ground history so to speak. What it was really like in the entire Roman experience from day to day from the founding through to the end of Rome.

LISA PETERSON:
Denis and I met in the late 80s in Chicago, when I cast him in a show I was working on. We’ve stayed friends since, but before An Iliad had not worked together in a long time. I would come and see he shows and we’d chat in the lobby, but nothing more than that. When I had the idea to adapt The Iliad, I thought to myself “who would I really want to collaborate on with this, someone who is an actor but who also may have a yen for writing as well”, and Denis came to mind. And I have to say ::laughs:: I’m pretty pleased with myself, because I was completely right.Once we got into a rhythm, our ability to improvise and work off of one another was better than I ever imagined it would be.

We actually have many similar interests. We’re both admittedly pretty geeky. We won’t binge watch a TV show or movies, but we wills sit together and watch consecutive. On-line lectures about Rome. We’ll walk through the Princeton campus and get sidetracked constantly by the history, or the buildings, or the organ music coming out of the chapel. We are always open to try a bit of everything when we collaborate.

DENIS O’HARE:
What I love about working with Lisa is just sitting back and listening to her talk about any subject she’s passionate about, which will inevitably lead to an increased interest from me, from my own different perspective. Which brings you to a point of view you may not have had otherwise. The great thing about it was that I had no expectations that this would ever come to anything. To me, it was just a great way to spend time with some I like, and wanted to get to know better. And to muck around with a subject that is worth exploring really helped to push us towards a place where supporters like McCarter made it a real thing has given us a good sort of pressure, a goal to shoot for.

You never really know how any project will turn out, and it’s easy to carry doubt with you all the time… but you keep at it all the same. It’s how you end up creating something new.