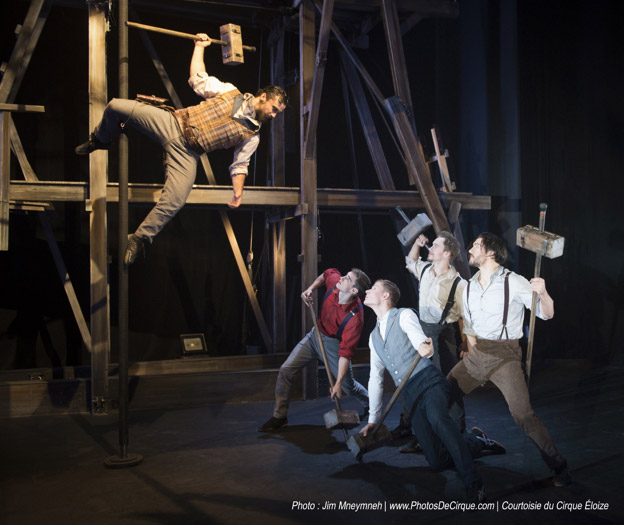 Cirque Éloize, the independent circus company whose innovative productions have thrilled audiences around the world is celebrating its 25th anniversary.

One of the things that contributed to Cirque Éloize’s success when it started in 1993-94, was the simple fact that there was nothing else out there like what they were doing, putting circus in theatres. “When we proposed to put acrobats in the theater with some story line and special music it was very unusual at that time,” Painchaud points out. “We were pretty much at the beginning of the movement programming a circus in a theater. Some people saw us at festivals, I remember.  The people who were running cultural festivals and theater festivals were amazed and surprised by our proposal that incorporated some sort of dramaturgy.  Another factor, I think, was that we were able to move quickly.”

There were only seven cast members when the company opened in the New Victory Theater on 42ndSt, in New York City in 1995, playing there for three weeks, just two short years after its inception.  The first review from the New York Times, which more or less made them a legitimate theatrical entity called the show “a circus in a suitcase.”

A suitcase fitted Painchaud just fine.  Growing up on Canada’s Magdalan Islands in an entrepreneurial family he was infected with an incurable wanderlust.  Eventually he wandered into the Canadian national circus school when it was still in its infancy.  There he not only learned certain circus skills but also developed a relationship with the staff, which was helpful when he began creating his own company.

Eventually, with his co-founder Daniel Cyr who later invented the Cyr wheel, they recruited their friends, officially opening the company and the corporation in the Magdalan Islands in the fall of 1993.

Amazingly the company was already enjoying great success by its second year, capping off a 125 show tour by opening at New York’s New Victory Theater.  Its second production which opened in 1997, Eccentricus, played more than 500 performances all over the world.

Probably the most remarkable thing about all this is that the company achieved its success with almost no subsidy.  In 2002 only 12 percent of its funding was from subsidy.  Today it has none.  In the beginning it was even less.  Its first subsidy which might more accurately be called a gift was for $5,000 to buy some equipment.  In contrast Cirque du Soleil started out with a government subsidy of a million and a half.

“We arrived in the middle of a recession in 1993 in Canada,” Painchaud recalls.  “There was no money and so we had to fight, but at the same time that gave us the drive to go forward because we were always by ourselves.  So this is why we went into theatres rather than a big top.  We had no choice.  We couldn’t afford a big top.”  Necessity once again serving as the mother of invention.

“We realized very quickly that it was very interesting to be in a theatre and we started to develop our work specifically for the theater.  We opened this market.” What made them appealing to theater bookers was that they were creative, lithe, agile, and could move quickly.

As a result of touring theaters their engagements tended to be of shorter duration, and since the company was thrown together in all sorts of intimate situations while on the road, they developed an ensemble approach to presentation.  With success came great and greater artistic ambition.  Their productions became more and more creative and innovative artistically, thanks to the directors they used.

Part of the company’s artistic success may be attributed to their courage in inviting theater directors and choreographers from dance to challenge their people. “From the beginning I always wanted to invite people who didn’t really know circus,” Painchaud says. “That was always my interest, to create something through this kind of collaboration.  I looked for that kind of creative people to invite them to play with us.  I didn’t want to stay in one image.  I wanted to explore with each new production.”

All that exploration has maintained and nourished the company artistically and financially for 25 years.

Click through for a video preview of Saloon, which runs May 11-12 at McCarter Theatre Center.

The full version of this article may be read here. Saloon: A Musical Acrobatic Adventure
Saloon, the newest creation from Canada’s Cirque Éloize, draws us into a vibrant comic book where dance, circus arts, original music, and theater collide to create a surreal dream-like experience. The infectious energy of folk music and the strains of fiddle set the tone for an acrobatic comedy that will sweep you away in a mad flurry. Lasso up some fun for the entire family!