Hollywood and Ireland: A History 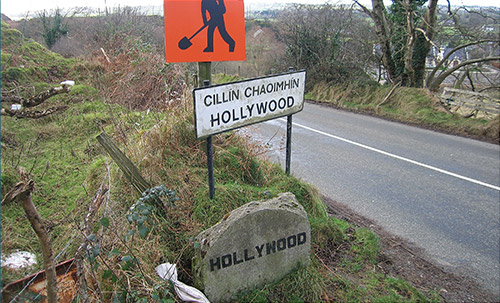 Nestled in the Wicklow Mountains, about an hour’s drive south of Dublin, lies the tiny village of Hollywood, Ireland.

One of Hollywood’s natives, Matthew Guirke, was among the millions of immigrants who came to America in the aftermath of Ireland’s Great Famine of 1845-1850. Settling just outside of Los Angeles, Guirke’s business ventures included the purchase of a small racetrack which he named after his hometown. A small community grew, and in 1903 Hollywood was merged with the city of Los Angeles in 1903. The rest, as they say, is history. 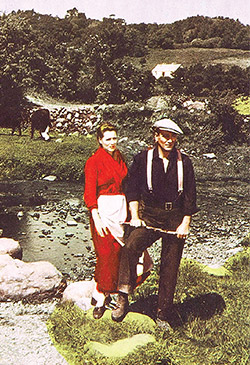 Beyond its namesake connection, the relationship between the American and Irish film industries has been a long and fruitful one. Installments in the Harry Potter and Star Wars series, and the acclaimed television show Game of Thrones have all filmed in Ireland. The beauty of the Irish countryside is also highlighted in films such as: The Quiet Man, directed by famed director John Ford, the Oscar award winning Braveheart and the cult classic The Princess Bride among many others.

Although Hollywood is glamorous, the upheaval and stress a big-time film shoot can bring to a small town is not always welcome in the local community. Stones in His Pockets playwright Marie Jones spoke of that dichotomy in a 2001 interview with Playbill: “These films are coming to these small towns because that’s where the scenery is beautiful, the wilds and all that. There’s virtually nothing there but a pub and a school and suddenly, there are American movie stars! They themselves are in the movie—they become the extras. The whole community becomes totally wrapped up in the movie and then it goes. And when it goes, it doesn’t go gradually—one day, there’s nothing left. [The play’s about] how the film affects people’s lives, when it’s there, when it goes. The two cultures are so entirely different.”

As stated in Ireland in Drama, Film and Popular Culture, on foreign films: “The development of Irish film has been marked by a severe imbalance between the representation of the island from foreign producers and filmmakers—by far the majority of the films produced —and the far less number that have emerged from the island of Ireland itself until relatively recently [the mid-1970s.]” This longstanding trend of Ireland’s persona being dictated by foreign film and outsider producers hasn’t left much room for the Irish to control their own image.

Historically, Ireland’s lush landscapes have provided an attractive backdrop for film shoots, but as quickly as these films set up shop, they wrap and disappear into oblivion. This reality was not lost on Jones, as well as the characters in Stones in His Pockets. As Jake states: “You come here and use us, use the place and then clear off and think about nothing you leave behind.”

Change is in the air, however. As the connection between the film industry and Ireland enters the 21st century, a new balance is being forged between the film industry and film tourism, which has resulted in a positive effect on the Irish economy. Ireland has become one of the best locations in which to shoot films throughout Europe, providing a 32% tax credit for those involved in filming on local Irish expenditures as well as tax relief on salaries for the cast and crew. These tax credits aid in bringing the beauty of Ireland to the big screen as well as providing resources to the local crew and community.  In turn, the greater exposure of Ireland’s natural beauty, the more visitors from around the world travel to see such wonders with their own eyes.