Myxolydia Tyler, playing “Chelle” in McCarter’s production of Dominique Morisseau’s Detroit ′67, recently sat down with us to talk about the production, her love for Prince, and much more. 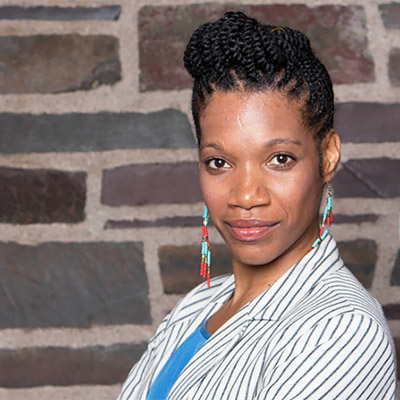 I think the thing at the heart and the soul of Detroit ’67 is perseverance. Thinking in terms of the word itself, “to persevere” can mean so many different things. Sometimes we do so at the expense of others, and at other times we persevere in an altruistic way. We have the ability to help others and move everyone forward.

In the play, my character’s brother, Lank (played by Johnny Ramey) is more of the mindset of “we move forward, not just me.” For my character, Chelle, she struggles with that concept over the course of the play. So much of what is going on inside that house is a microcosm of what goes on outside on the streets. The conflicting ideas between Chelle and Lank regarding how to make it through turmoil is central to this story. My hope is by the end of the play she has found a way through and is in a better place to understand that idea…the idea of the “we”.

I got to know Dominque Morisseau a while back, she was actually my neighbor for a time, and we met working together at The Women’s Project in NYC. During my first show there we really vibed in the rehearsal room immediately. Dominique finds the rhythm in language, and that’s what draws you in. I have a harder time memorizing prose than verse, because rhythm makes sense to me. It’s so easy for me to fall into the rhythm of Dominique’s words.

In terms of my fellow cast-mates, just being in the same room with these people is a joy. A few of us, like Jade (director Jade King Carroll), Nyahale Allie and myself run in the same circles, but it feels like friends never get to work together. Just to be able to work every day with people you admire and like being around is fun because even if the work is hard, you still connect with others in the room as friends. Every one of us in this cast genuinely enjoys each other’s company offstage as well as onstage.

Every time I do a new show, I make a soundtrack for my character. For us as humans, I think we make music and listen to music because words alone cannot do what the combination of lyric and music does together in a song. Ask anybody who knows me, they’ll tell you I am a huge Prince fan. I think one of the reasons is because he was so prolific. His music has been a part of my life since I was a child. The way he combines rock and R&B and soul music really resonates with me because I’m a fan of so many different genres. At least one or two Prince songs make their way on to each playlist I make.

My favorite moment in the show is when you hear “Everybody Needs Love” by Gladys Knight and the Pips. It’s a song used to speak to Caroline’s (played by Ginna Le Vine) experiences in the show. The opening lyric, “So you want to be loved”, really hits you because that’s what she’s been searching for and hasn’t found yet. It really captures her journey so beautifully.