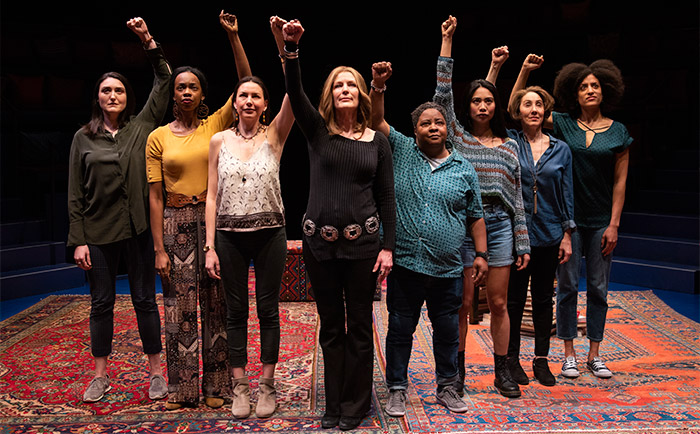 Patricia Kalember (center) as Gloria Steinem, with the NYC company of Gloria: A Life. Photo by Ahron R. Foster.

GLORIA: A Life, the groundbreaking play celebrating the life of activist and icon Gloria Steinem, willcomplete its extended run as scheduled on March 31, 2019. The production was originally scheduled to close on January 27, 2019, but extended to March 31 due to popular demand.

Following its run in New York, GLORIA: A Life will be presented at McCarter Theatre Center in the fall of 2019, as part of Ms. Mann’s final season.

Hailed by New York Magazine as “a unique, deeply moving” experience, GLORIA: A Life is a “living, breathing documentary” (WNYC) celebrating one of the most inspirational activists of our time. The first act is her story; the second is our own: Act Two is a Talking Circle in which the audience is invited to carry the play into an open conversation.

The production honors Gloria Steinem’s gender equality activism with a company comprised almost entirely of women – cast, creative team, designers, production staff, and producers. Women are represented across every department of the production and occupy nearly all of the highest positions throughout the company. Even in a theatre industry often regarded as an equality leader in the entertainment world, this extraordinary group of women is unprecedented either on or Off-Broadway.

The remaining plays in McCarter’s 2019-2020 Season will be announced in mid-March.