How literature and music take storytelling to new levels. 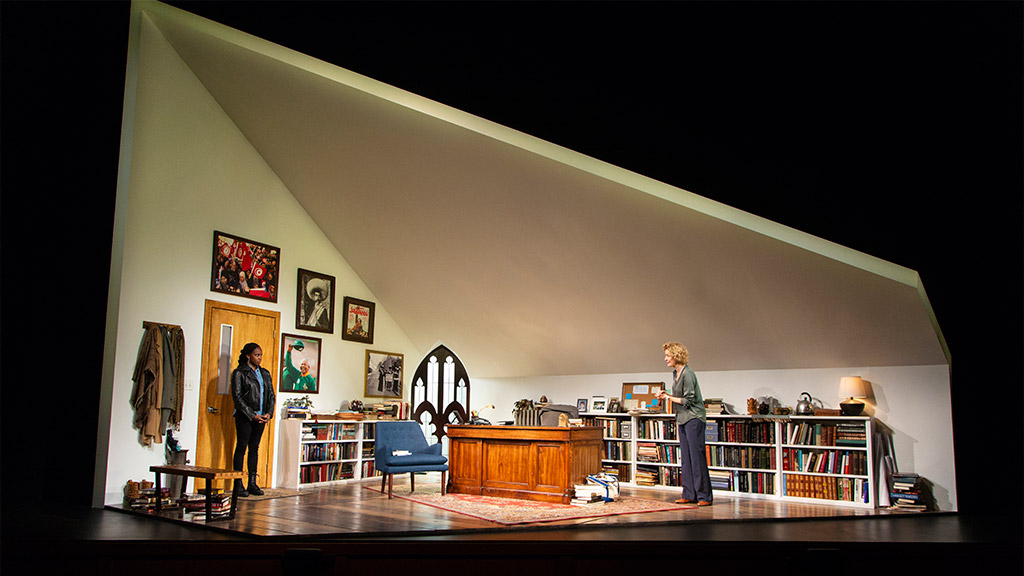 Jordan Boatman and Lisa Banes in The Niceties. Photo by T. Charles Erickson.

McCarter’s Berlind Theatre is currently the center of an extremely lively discussion with the world premiere of Eleanor Burgess’ The Niceties. What begins as a debate between two brilliant, liberally-minded women soon escalates into a dangerous exchange with stunning implications and revelations.

Apart from a vividly entertaining battle of wits and words, a big part of the world created focuses on music and literature. We sat down with director Kimberly Senior, playwright Eleanor Burgess, and sound designer Elisheba Ittoop to discuss their behind-the-scenes inspirations.

Playwright Eleanor Burgess: “Here’s a fun thing - some of the books on set are actually from my private collection. Something that was very important to me was that every book the audience could see would be a book Janine (played by Lisa Banes) would actually own. We omitted any space-filling titles. No novels, cookbooks, self-help titles, etc. Going deeper into the reality of Janine’s world, we recognized that historical scholars don’t actually even read the history books that most of us read - they’re less likely to read the new Ron Chernow biography or a blockbuster like Team of Rivals. They read a lot of highly specialized material - essay collections, primary documents, rigorous analyses that are too dense and too specialized for the average reader. And Janine specifically is a comparative revolutionary theorist, whose book collection would be very international in scope and focused in subject.

I wanted an audience member who takes a closer look at the stage to see books like that, so I took some of the heaviest-duty books from my college courses and put them around the stage. When you take a closer look at the set, you discover books like The Radical Reformation - a collection of essays on the peasant revolts and the fringe theological movements that cropped up in the wake of Martin Luther, and The Patriots of ‘37, a 600-page history of the 1837 French Canadian revolt against the British.

When I’m writing, something that’s always important to me is that the people who know the world I’m writing about find the play truthful - and that’s especially important when you’re putting on a play like this at a place like the McCarter, where a substantial chunk of the audience is going to really know and be part of the world the play is set in. Every little piece of the design plays a role in making a show that, hopefully, really rings true.”

Director Kimberly Senior: “With regards to music: In our conversations we were excited by presenting more baby boomer era music at preshow to lull the audience into a place of comfort- it's Janine's world after all- then by intermission things are shifting to a different generation.”

Sound designer Elisheba Ittoop: “Preshow is the past. It is of the baby boomers' world, it is Janine's world. It is rooted in ‘60s and ‘70s protest and that sort of peace/love/understanding vibe, and it goes chronologically from '64 to '73. I like what Kimberly said, there is something to it that lulls the audience into a sense of comfort. This is protest that they know about, they can relate to.

Intermission advances us through time. It goes almost chronologically from '84 to '07. I particularly enjoy hearing Rage Against the Machine, Eminem, and Green Day during this, as well as both rap songs that pointedly detail police brutality.

Protest is still very much a thing, but now it's looking pointedly more... angry? Uncontrolled? The language is definitely more pointed. I like the idea even of maybe audiences getting a little “frowny” about the curse words in there. I think of Janine hearing Zoe (played by Jordan Boatman)... but because of how Zoe says the things, Janine can be dismissive of her.

Curtain call is present day, it's black, it's female, it's unapologetic. It was very important to us that the final song of this world be from a woman of color. To that end, our final selection of “Freedom” by Beyonce (feat. Kendrick Lamar). I love the lyric "I'ma keep runnin', 'cause a winner don't quit on themselves" because it feels very “end of show Zoe” to me, where she's headed after this final moment.”

Come see (and hear!) for yourself. The Niceties runs on the Berlind Stage through February 10.

For more on the musical selections featured in the production, visit our Spotify playlist. Discussions of grammar and Google between a professor and student turn to race and reputation. And before they know it, they’re in dangerous territory, facing stunning implications that can’t be undone.