Christmas in the Age of Dickens 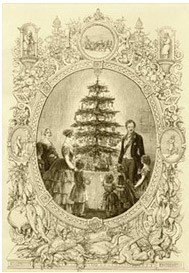 Charles Dickens is often credited with contributing to the creation of Christmas holiday traditions as we know them today. In the 1840s, Dickens produced a series of extremely popular Christmas tales (known as his Christmas Books) for the purpose of regenerating what he felt was the true spirit of Christmas. A Christmas Carol is the first of Dickens’s Christmas Books, and the first edition of A Christmas Carol quickly sold out after its release on December 9th, 1843. He wrote four more in the twenty-five years after its publication: The Chimes: A Goblin Story of Some Bells that Rang an Old Year Out and a New Year In, The Cricket on the Hearth: A Fairy Tale of Home, A Battle of Life: A Love Story, and The Haunted Man and the Ghost’s Bargain: A Fancy for Christmas-Time. None were as popular as A Christmas Carol, his most beloved and widely acclaimed work, cherished for its simple expression of what relations between human beings should be at Christmastime, and throughout the year.

In the novella, Scrooge’s nephew sums up this Christmas spirit:

“I have always thought of Christmas time […]as a good time: a kind, forgiving, charitable, pleasant time: the only time I know of, in the long calendar of the year, when men and women seem by one consent to open their shut-up hearts freely, and to think of people below them as if they were really fellow-passengers to the grave and not another race of creatures bound on other journeys.”

Partly as a result of the traditions described in A Christmas Carol and the influence of Queen Victoria, the English Christmas was transformed in the mid-1800s. Victorian Christmas embraced ideas of “family, charity, goodwill, peace and happiness” (BBC) and emphasized the obligation of the rich to the poor, reflecting the realities of a growing lower class in England (a result of the Industrial Revolution).

In 1840, when Prince Albert celebrated the holiday at Windsor Castle by presenting his family with a Christmas tree (a custom from his own childhood in Germany), much of England followed suit. Christmas trees became even more popular after an illustration of Queen Victoria, Prince Albert, and their children decorating a Christmas tree was published in The Illustrated London News in 1848. Victorian Christmas trees were elaborately decorated with trinkets such as tin soldiers, dolls, whistles, candies, fruit, nuts, and candles. Decorations were often homemade, and children helped make garlands and paper decorations.

As this new Christmas took hold, the Victorians established many other customs that are at the center of today’s traditional Christmas celebration, including caroling, gift-giving, and sending Christmas cards.