Director of A Christmas Carol 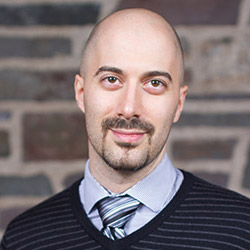 Anna Morton: Can you describe your vision for this production of A Christmas Carol?

Adam Immerwahr: Well, there are lots of components to it. I was interested in thinking about how Scrooge’s redemption isn’t just the redemption of one man: A Christmas Carol is not only the story of one person changing, it’s the story of how when a person changes, it can transform an entire community. To that end, I was thinking about how we could create a version of A Christmas Carol that will help tell the story of Scrooge’s impact on a community both before and after he changes.

Anna: And since you are focusing on Scrooge’s relationship to the community, this production features an ensemble of actors from the greater Princeton area. Can you talk about your concept for the Community Ensemble?

Adam: A number of theaters around the country are bridging the professional-participatory divide by inviting audiences to become actively involved in the work. McCarter has, over the last several years, become much more porous to the community: I was interested in seeing how we could extend that even further by taking one of our professional productions and really involving community members by having them as members of the ensemble, and by giving them substantial roles—so that’s what this production is doing.

Anna: When you were here as McCarter’s Associate Artistic Director, you worked extensively with groups in the community like, for example, our OnStage Seniors. How have those experiences fed into what you’re planning for the Community Ensemble in this production?

Adam: It’s simply part of what I do: I’m interested in working with people to tell stories, whether they are professional actors or not. I have enormous faith in the artistic ability of everyone to get onstage and embody a role, fill a stage with joy and light, and tell a story. My past work has really given me the confidence that this community is full of people who can bring something special to A Christmas Carol.

Anna: I know that you revisited Charles Dickens’s novella early on in your process. What did you take away from the original text for this production, and what kind of discoveries did you make?

Adam: I made a lot of discoveries about the world Dickens imagined. Even the way that he charts the weather across the course of the novella felt to me really useful in trying to understand what he wanted to convey. I also found some sections of the novella that I was surprised by; scenes that in our adaptation were set in one place that could actually be set somewhere else because it better matched the novella. The last thing that I found was a sense of how Dickens imagined the relationship between Scrooge and the people around him. There are descriptions of Scrooge flying over London, which of course you can’t fully produce on a stage, but I came to realize they’re about Scrooge seeing the entire town on which he has this tremendous influence.

Anna: Speaking of flying, we have Jeremy Chernick, a special effects designer, working on the production. Is there anything that you can share at this point in time about your collaboration with him?

Adam: It felt essential this time around, for the first time at McCarter, to bring a special effects designer in. It’s a ghost story! There’s magic that happens in front of our very eyes in the play, and why not have it happen at the highest possible caliber? Jeremy Chernick is one of the top special effects artists in the country for theater; he did many of the effects for the Harry Potter stage play to great acclaim. He’s helping us to imagine a lot of the essential pieces of the story, such as Scrooge’s doorknocker, Marley’s appearance and exit, and the gravestone, among other moments.

Anna: You have also been working with composer Michael Friedman on new music for the production. Can you talk about your and Michael’s musical approach?

Adam: We wanted to go back to the treasure trove of terrific Christmas music of Dickens’s era. What we found was a wealth of gorgeous, interesting, and sometimes surprising songs—some familiar, and some not. We found enough rich work to build a full world for the play. We also found some carols that we aren’t going to use explicitly, but that will become part of the underscoring of the play. Songs like the Wexford Carol, which is just exquisite, will sit underneath the play and help us shape the experience of it.
It’s been a terrific collaboration. Before Michael became well-known for writing musicals, he was a music consultant and composer on a wide range of plays, both classic and new. He has an incredible depth of musical knowledge.
[Editor’s Note: since this interview was conducted, Composer Michael Friedman has passed. We dedicate this production of A Christmas Carol to his memory.]

Anna: Do you have a favorite Christmas carol?

Adam: I do, and it’s in the play. It’s one I discovered since working on this project. You’ll have to hear it when you come see the production!

Anna: I can’t wait. We have many young audience members for whom A Christmas Carol is their first theatrical experience, and some audience members who return to see the show year after year. Why do you think Scrooge’s journey resonates with so many people?

Adam: Well, his journey illustrates our hope that we might change and become better people, the hope that we might see the impact of our actions, see how we became who we are and what that might lead to in the future. People go to the theater because they want to see characters change. In real life, we don’t get to see people change very often. So we go to the theater to get this experience that we can’t always have in real life, and we find it hopeful and exciting to see someone go on a journey that teaches them something and changes their actions. To me, that’s part of what makes A Christmas Carol universal.

Anna: In your words, why should people come and see this production of A Christmas Carol?

Adam: If you’ve ever seen McCarter’s A Christmas Carol before, you’ll want to experience this one. It’s a new approach, a new way in, a fun example of how you can take the same story and tell it many, many, many different ways. We have a wonderful cast of terrific actors; we’ve got a great Scrooge: Greg Wood, who’s one of the top actors in Philadelphia. It’s a joyous celebration of our community, and what our community can put together when they all pitch in. I’m really excited about that.