The Gächinger Kantorei and the Bach-Collegium Stuttgart have been under the artistic directorship of Hans-Christoph Rademann, the new Director of the Internationale Bachakademie Stuttgart, since August 2013.  At the heart of the ensembles’ work is their participation in the MUSIKFESTUTTGART in many different ways, and a major concert series of oratorio programmes ranging from Schütz to contemporary commissioned works. A particular focus since their inception has been the interpretation of the vocal works of Johann Sebastian Bach’s Mass in B minor.

The Gächinger Kantorei Stuttgart was founded in 1954 by Helmuth Rilling and is named after a small village in the Swabian Mountains in southern Germany. For several decades it has been regarded as one of the most outstanding concert choirs in the world. As well as regular performances with its partner ensemble the Bach-Collegium Stuttgart, the group works a great deal with orchestras including the Vienna Philharmonic, New York Philharmonic and Israel Philharmonic.

With the Bach-Collegium Stuttgart (founded as instrumental partner to the choir in 1965) a musical ensemble has developed playing on modern instruments. It has made its name performing both Baroque music in a historically-informed style as well as the oratorio repertoire of our time. Teachers from the Bach-Collegium have had a considerable influence in courses initiated by the Bachakademie which offer further training for highly talented ensemble musicians. 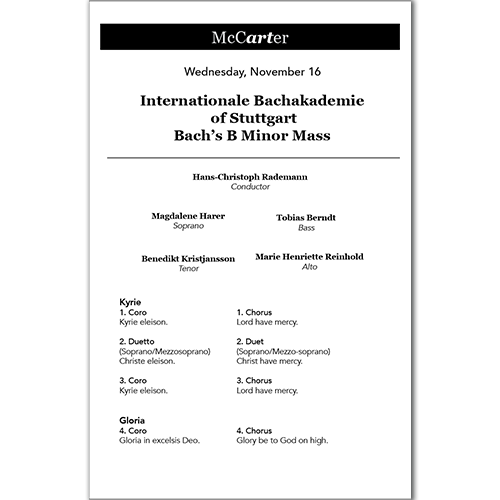